I’ve been using the Retriev-R-Trainer’s versa launcher for coming up to a year now and have got to say I’m really impressed with the equipment. 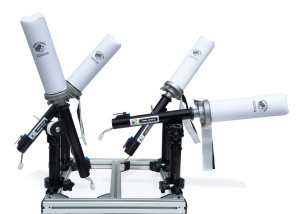 So how have I found it? I have gradually built up the system from 1 to 6 and have another 2 tubes waiting to be added. The system is really versatile and allows you to set up numerous different retrieves all from the same location, which is really beneficial when it comes to teaching marked retrieves in a picking up drive scenario.

I have also used it for teaching dogs to improve marking at distance, experience a walked up scenario and for steadiness training with single dogs or group dogs and in a large group setting. I’ve also used the system when working with gunshy dogs to work towards rehabilitation. One dog in-particular has been rehabilitated so well, she is now regularly being shot over and working in the field. 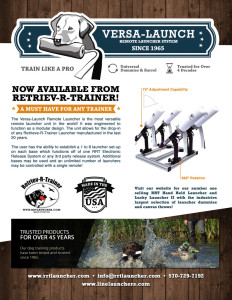 The versa launcher system is really easy to use which is fantastic. The remote control system is rechargeable and I upgraded the remote system at an extra cost to the dogtra deluxe. Although once assembled, there is no more assembly, you do need to attach the wiring loom to the versa launchers which is just a multi pin plug system. Easy!

There are three launcher blank loads available to use with this system, yellow, green or red. I’ve used both yellow and green (wouldn’t use red as I feel it’s too heavy load for hand held launchers) The blanks aren’t made by RRT and I’ve found that this is the only thing that lets the system down as the blanks can be hit and miss so it’s not RRT’s fault.

The system is available in the UK and available direct from me. For more information do not hesitate to get in touch or alternatively visit Retriev-r-Trainer

This site uses Akismet to reduce spam. Learn how your comment data is processed.

Great time had training with Ora and Ziva tonight